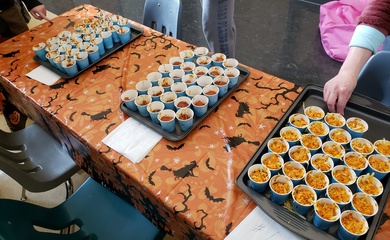 It’s hard to believe it’s been happening for over a decade now, but Corman Park’s 11th annual chilli cook-off was held on October 31st.

In the spirit of having so many cook-offs behind us, we talked to unit manager Josh Miller (formerly from Corman Park) about his time in the competition.

“I absolutely miss the chilli cook-off. It was so freaking awesome to compete with everyone, and have the kids really love and enjoy getting into it, too! It’s such tough competition!”

As a former MasterChef contestant, one would think Josh would have an edge over any cooking competition – and he might’ve, but it’s not what you’d expect.

“The real trick was just keeping it simple…” Josh (who only managed to win once, in spite of all his years participating in the chilli cook-off) said.

“…And a kind gesture of a free sour patch kid with every serving.”

one from Prince Albert). Chili number one was prepared by Anna Martens, an educational assistant, with help from students. Since there were no bribes, it’s safe to assume Anna’s chilli – which won by an impressive margin – was the best tasting of the bunch!