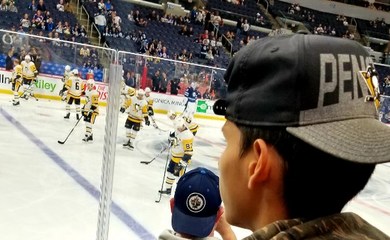 When Ranch Ehrlo youth Brock* approached unit manager Mike Deis and youth care worker Les Yufrym if it would be possible for him to travel to Winnipeg to watch his favourite team, the Pittsburgh Penguins, take on the Jets, it seemed like an unlikely dream.

“We gave Brock the impression that we didn’t think this was possible.  As far as Brock knew, he was not going to be able to go.”

But they were already creating a plan and worked with directors, the ministry, and Brock’s caseworker to obtain the necessary permissions to make his dream a reality. Until that happened, they decided to keep it a secret from Brock to not build hope up until everything was confirmed.

Brock and Les, who also is part owner of FitZone, have a common interest in hockey and have built a solid relationship over the game they both love. The two of them frequently watch games together and have a friendly rivalry in place when their teams square off. With this existing relationship, Les was a natural choice for the next step in the plan.

“We didn’t tell Brock anything. He knew I have a farm and I mentioned sometime that we should go out there. It’s about four hours away,” Les explained. So their cover story was born.

“I told him we would go out to the farm and on the way back we would stop at my house and watch the game.”

Several hours into the drive, Les revealed the true reason for their trip.

To begin with, Les stated that he didn’t think they would make it back to his house for the start of the game and would have to watch it from the PVR.

“Then I said, ‘but you know what’s better than that? To be there in person.’”

The pair arrived safely in Winnipeg and were one of the first few people in the rink. They had the opportunity to stand right by the glass to watch Brock’s team, the Penguins, warm up. The icing on the cake was when the Penguins pulled out an impressive 7 – 2 win over the home team.

“When we were sitting at the game, he told me that this is a memory that will stick with him forever,” Les said.

“It was awesome looking back at him watching his dream. His eyes were so big. I was glad we could all make it happen.”

“It was a great, great experience and I’m glad I got to be able to do that for him, make his dream come true.”