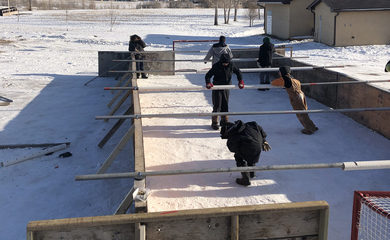 One of the highlights of winter at our agency is the annual Winterfest celebrations.

“The star event was the life-sized foosball event,” explained Jewison House unit manager Mike Torrie. “There was a tournament between the houses and a big trophy at the end to be won.”

Projects like this are possible when staff are engaged and have a relationship with the youth they work with. They are a wonderful example of what can and does happen when staff goes above and beyond what may be considered the call of duty.

“I really want to give credit to the direct care workers,” Mike emphasized. “They’ve put in so much energy and time, and it’s spreading to the youth. They’re taking ownership and responsibility and are engaged in what we’re doing.”

“It shows the power the frontline workers have to influence what happens.”

“These guys are all in. Their relationships with the youth are the real deal,” said caseworker Tandi Van Tol of Jewison staff. She described a day of building that featured just Brandon, Ryan, and one youth. He’d had a difficult day and Brandon and Ryan, who were working on the curling rink, invited him to help.

“They came on their own time – they were off-shift. They just spent time with him. The three of them worked together for a few hours because this youth loved helping,” Tandi explained.

In another instance, a youth who was relatively new to the house was assigned a task that was developmentally appropriate, exemplifying yet another CARE principle. CARE, Children And Residential Experiences: Creating Conditions for Change, is a multi-level program aimed at improving services for children and youth in care based on six guiding principles.

“His duty was to pass nails to the staff to hammer it in because that’s kind of all he can manage at this point in time. He’s task orientated, so they gave him that little task, and he was happy,” Tandi said.

Even when the youth were unavailable, staff continued to work in order to make sure the curling rink would be useable regardless of the weather. Staff flooded the surface in the late-night hours when it was coldest (a time when all the youth were long since asleep for the evening!) to be sure the ice would be thick enough to withstand some melting.

Many friends and family attended the celebrations (highlighting the “family involved” CARE principle) and the youth were extremely excited to showcase all their hard work and have a great day of winter fun!

*Thank you to Eden Landscaping Ltd. for your generous donation of equipment and materials to make this project happen!