Youth at Kruzeniski House recently were real-life superheroes to an injured gopher.

Staff and youth were out for an evening walk when a staff nearly stepped on a baby animal on the sidewalk.

“Without hesitation, the youth we were with got down and immediately tried to help the baby animal,” recalled youth care worker Katelyn Crawford, who was one of the staff on the walk.

The animal, which turned out to be a gopher, still had its eyes closed and was attempting to crawl along the path where the group was walking. Knowing it would be trampled if it stayed where it was, the group wondered what to do.

“We were thinking the mother would surely come, but the risk of leaving him was so high – he most likely would’ve gotten crushed by a passerby, or snatched up by a bird,” Katelyn explained. 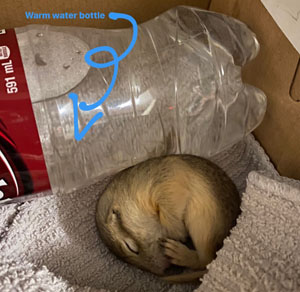 After some thought, they knew what needed to be done. One of the youths picked up the baby gopher and placed him in the bucket of a hat, and everyone took turns carrying the hat back to the unit. When they returned home, the youth sprung into action: finding a box he could rest in and outfitting it with cloth to keep the baby warm and filling a pop bottle with warm water.

The staff found a place that would take him if he survived the night.

“We called Salt Haven West and asked if they would take him if he survived the night. They said he likely wouldn’t because parks set out poison to kill gophers, but they’d admit him in the morning if he was to make it.”

One of the staff cared for the baby overnight and we are happy to report he made it!

“I’m so happy to work with amazing staff and youth who are willing to care for something as small as helpless gopher – because most wouldn’t,” said Katelyn.