Nine things you might not know about Ranch Ehrlo

We write a lot about Ranch Ehrlo and cover topics from clients, staff, guiding principles, activities, etc. But we dug deep to find these nine little-known (hopefully surprising) facts about the agency.

When the Ranch started over 50 years ago it employed 12 people. Since then the agency has expanded across the province and includes professional disciplines from direct care workers, caseworkers, teachers, support staff, job coaches, speech pathologists, family therapists, and more.

2. The agency joined the Child Welfare League of America for many reasons-one not talked about was improving neighbour relations.

Ranch Ehrlo joined the league in 1969 to help strengthen its public education and the quality of its programs after it ran into issues with the community while trying to expand its services from Pilot Butte into Regina.

That was the year the Ranch opened its doors to a 15-year old girl from the North West Territories (now Nunavut). Programs continued to expand over the years, including the introduction of family treatment. Clients now come from different backgrounds; they range in age from six to 60; they speak English, Dene, French, Cree, and other languages.

With a $75,000 Kin Foundation grant facilitated by the Wheat City Kinsmen, construction started on the first school. This was a turning point for the Ranch from residential treatment to its current more holistic approach with an education component.

Contributing to healthy communities has always been important to the agency. As Ranch Ehrlo developed community services, there became a need to establish a separate non-profit corporation. In 1995, Ehrlo Community Services was created. But in the years that followed as the services of these agencies continued to intersect, the decision was made to rejoin the two corporations in 2011. Community programs include: community counselling, free sports programs and lending library, affordable housing, and early learning centres.

After years of hard work and lobbying by the Ranch’s administration, the Kelsey Campus of SIAST (now Saskatchewan Polytech) began delivering a certificate level program of studies for Youth Care Workers in 1991. We continue to support the program by providing practicum placements for students participating in the course.

7. The Ranch founder is also an Order of Canada recipient.

Geoff Pawson founded Ranch Ehrlo Society in 1966. He was an instrumental advocate for youth and children throughout his career and received the honour in recognition of his work in 2000. Geoff passed away in 2012 but his passion for helping young people, families, and the community continues on.

8. We have been featured in Readers Digest. 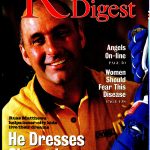 9. A Kennedy came to speak at an agency event.

In 2001, Robert F. Kennedy Jr. was a speaker at a Ranch Ehrlo fundraising dinner! 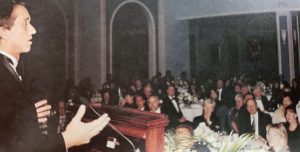